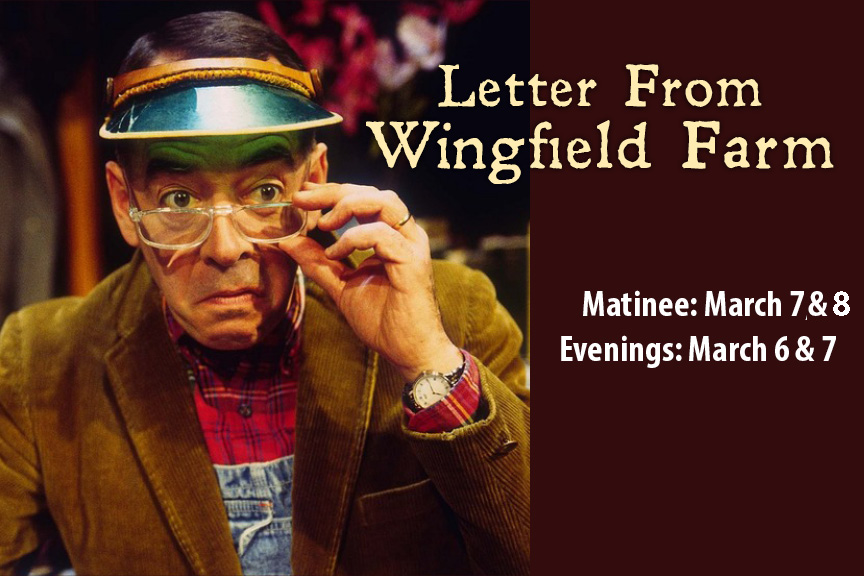 When a city businessman trades his pinstripe suit for overalls and retreats to a hundred-acre farm, the residents of Persephone Township raise their eyebrows. Weekend farmers are a common enough sight, but this man seems to think he can make a living with a broken-down racehorse and a single furrow plough.

‍Letter From Wingfield Farm is the story of one man’s attempt to embrace a less complicated world. In a series of letters to the editor of the Larkspur weekly newspaper, Walt Wingfield tells of the people and events of his first year as a man of the soil.

Tickets include a delicious buffet meal before the show.

It is a great thrill to welcome you to the seventh annual Rosebud Chamber Music Festival. RCMF is a grassroots project committed to bringing world class musical performance to the rural communities in the Canadian Badlands. The mission of RCMF is to showcase international performers in concerts, education and outreach programs. Our spectacular artist lineup includes some of the brightest talent in Canadian music. I am thrilled to welcome them to Rosebud, Alberta, the artistic heart of the Canadian Badlands. My hope is to see RCMF guest artists and visiting students find a home for their hearts in Rosebud where talented actors, musicians, visual artists and crafts persons have made creativity and excellence their hallmark.

"Chariots of Fire" is presented by special arrangement with Samuel French, Inc., a Concord Theatricals Company.

No material element of the staging seen in the original production of the Play (as performed in London's West End) may be knowingly copied or used in any way whatsoever.

On May 13th treat mom to the special day she deserves.